From fast food to fast riffs 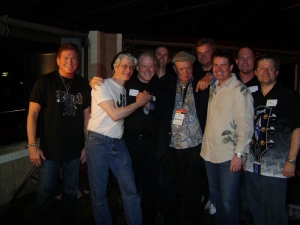 Founded in October 2007, the Eddie V Band has spent ten years rocking out some amazing music for charities and nonprofit organizations. Though the band is based in Chicago, Illinois, they’ve played all over the US: Washington, D.C., San Antonio, Boca Raton, Denver, and Orlando, just to name a few.

The band started adding members in April 2008 and gradually expanded from three people to twelve by 2011. In fact, backup singer Paula Marshall joined the band during their Washington, D.C. gig by jumping up on the stage and declaring, “I’m joining this band.” Current lead vocalist Eddie Volkman, a longtime fixture in the Chicago radio scene, joined the band in 2009.

In 2017, Chef Dan and the Appetizers officially changed their name to the Eddie V Band. Their goal is to make sure charities can have some fantastic music at a reduced rate, and look forward to giving back to their communities with every gig. 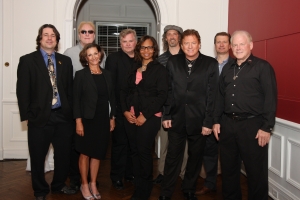 Throughout the years, the Eddie V Band had around 30-40 people total perform with the band. Their youngest member was a 12-year-old girl who was a heart patient at Loyola University. She played with them at a Ronald McDonald House event, and has since gone on to sing the National Anthem for the Cubs, Socks, Bulls, and Black Hawks!

The band likes to cover songs that people recognize – familiar favorites that are fun to dance to. You can recognize their songs within the first 10 seconds.